So this update is pretty late, but that's how I like to do things. I only want to write when you're trying to put off something else, and I haven't had anything to put off except this!


So about 3 weekends ago, the last weekend in August, my one roommate, Cathy, and I had bought tickets to go see Weird Al in Milwaukee, WI cause the show in Glen Ellyn, IL had sold out except for single seats. And who really wants to sit alone at a concert?

The night before the show Cathy and I decided to get drunk and play video games as a Friday night celebration. We bought two big, cheap bottles of wine and proceeded to drink and play Halo 3 online. I believe I had a pretty interesting Twitter stream that night about how I was going to eat all the ice cream because I had finally gotten a gym membership (that I just used for the first time last night) so it was justified. We both had headsets and while our first few games were good, later games spiraled into us just screaming random bullshit into the mics, talking about our lives while not paying any attention to the game, and then singing Lady Gaga to our team. I'm surprised we didn't get kicked from any games. Or maybe we did and I just don't remember it.

I woke up the next morning with a massive headache (thanks cheap wine and lack of pickle juice) and the desire to die. Didn't seem like the best way to start off WEIRD AL DAY but it was only 9am and we didn't need to leave until 5pm for Milwaukee. Lucky for me I had a professional massage scheduled for 11 that morning, so I got up, got myself a giant Gatorade to start proper hangover recovery and went off to my massage. The massage got rid of my pounding headache, which was much appreciated. I'm not really sure what I did the rest of the day, I think it involved napping and Starcraft II.

Anywho, around 5ish we finally left for Milwaukee. The trip consisted of talking about boys, listening to some podcast that kept bringing up Fleshlights and then eventually stopping off in Racine, WI for Chick-Fil-A at a horribly depressing mall. The wing of the mall where the CFA was had only the CFA and a Chinese fast food place that no one was eating at, the rest of the wing of the mall were closed up storefronts. We decided we had enough time to explore this sad depressing mall. We were then disappointed when the rest of the mall actually turned out to be decent and then we couldn't resist but stopping in the Gamestop where we then wasted time talking to the two employees who were amazed at two girls who played on Xbox Live (I had been looking at some of those xbox controller keypads for drunk xbox live messaging).

We left a little later than expected, got lost in Milwaukee trying to find the parking garage that's address was on one street but the entrance was on another. Cathy's gas light was on so as we continued up floor after floor of the parking garage trying to find a spot we were sure we were going to run out of gas, but we made it, ran to the Riverside Theater and only missed the first song. After the show we went and were nerds by the tourbus to try and get some autographs.

We met his guitarist, Jim West, and he signed my R2-D2 shirt for me and then we got to talking, told him we were from Chicago and drove here cause the show the next night had sold out. He ended up thinking we were awesome (or cute) enough to give us his comp tickets and aftershow passes to for the next night! We also met Steve Jay, the bassist (who I am strangely obsessed over just look at how happy I am) and Weird Al himself. All three of which signed my shirt. 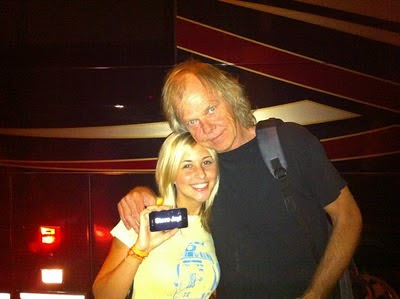 Steve Jay what a guy! 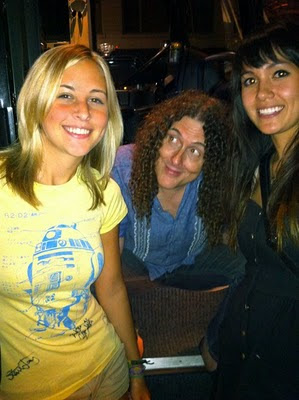 So, we didn't get home till like 4am and then promptly went to bed. Next day I don't think I moved from the couch most of the day. Just had a nice, proper, lazy Sunday. We texted Jim thanking him for the tickets and that we would not be late to this show. As we were leaving out the door of our apartment I somehow missed the last step and gracefully caught my fall with the side of my right ankle. But I limped my way to the car and we made it to the MAC Theater at the College of DuPage on time. This time I packed my camera and got a boatload of pictures! 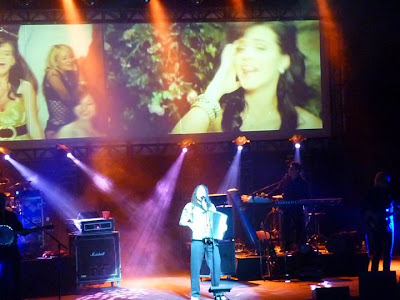 Polka Medley with "I Kissed a Girl" 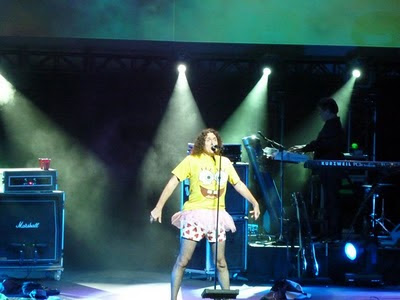 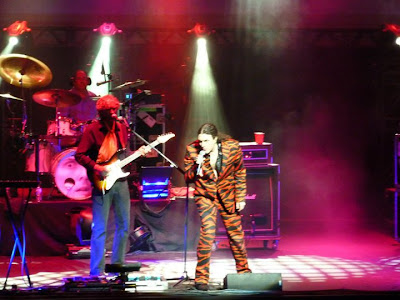 "Wanna b ur lovr" 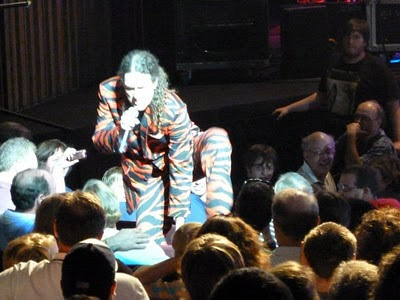 Oh Weird Al how I wish you would put your crotch in my face. 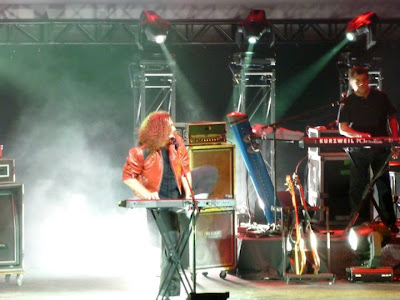 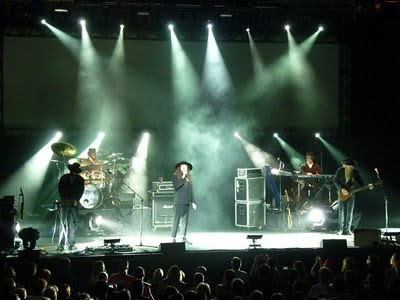 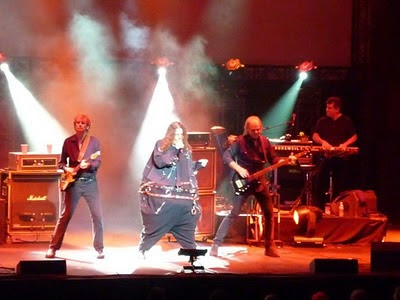 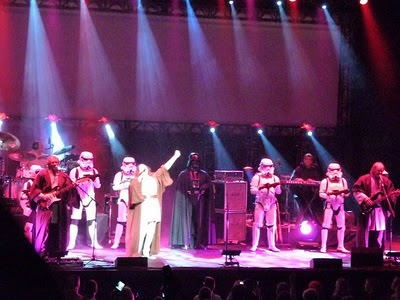 We all have cellphones so come on let's get real. 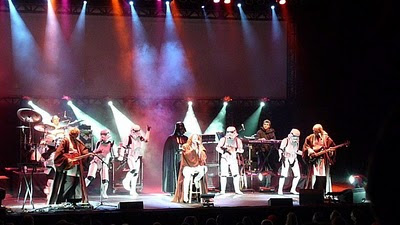 So the previous night in Milwaukee they did not have Stormtroopers. It's apparently something they do with local Star Wars clubs and Milwaukee didn't have one (or didn't have one that was awesome enough to do this). Cathy and I (but mostly Cathy) were more excited about Stormtroopers than anything else at this point.

After the show we got to go to the aftershow room cause of our awesome passes and we got to MEET STORMTROOPERS. Yessss. 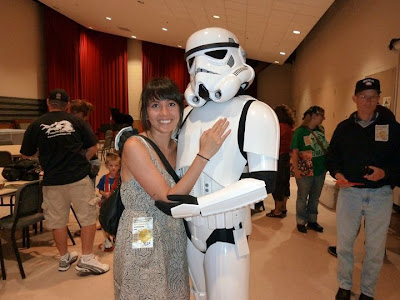 Cathy and her Stormtrooper Boyfriend. 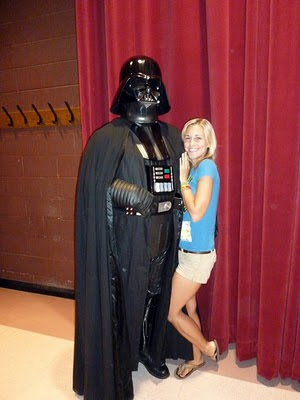 I loved Darth Vader before the new, crappy movies came out. 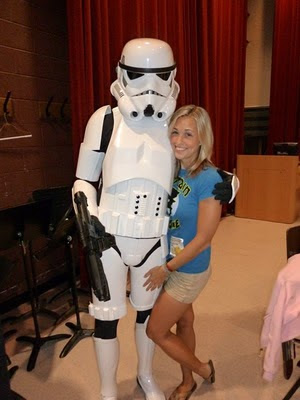 Not sure why I'm touching his leg but eeee Stormtrooper! They let us wear their helmets! 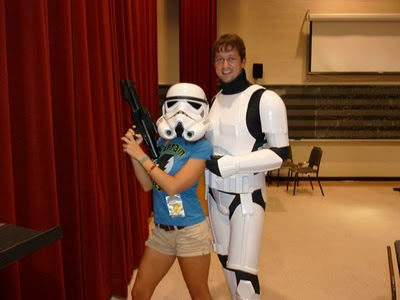 We got to chat with Jim again for a bit, got a pic with him that I look silly in so it's not going up here. We then got Weird Al to sign our aftershow passes and Jim introduced us to him as "Two girls who are raising the bar on nerd-dom."

We then rocked out to Lady Gaga and The Black Eyed Peas on the ride home all the while Cathy is having nerdgasms over Stormtroopers.

All in all, a great weekend. 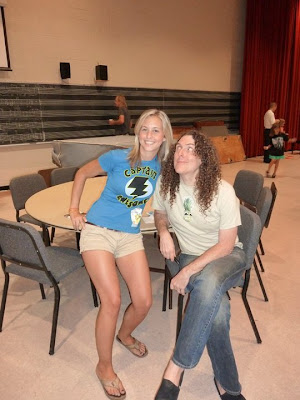