Today my boyfriend and I went out for about 10 minutes to buy something down the street, leaving the cats alone in his apartment. We come back and somehow Gizmo, the 5 month old kitten, had managed to knock a glass off a table and break it. This wasn't any thin glass, like the 2 wine glasses he smashed last month, this was a thick glass AND he knocked it onto carpet.

So I thought I would let you all know why you actually don't want a little kitten and why a lazy, more adult cat, is better.

1. They eat. A lot.
Gizmo's stomach must be a bottomless pit. He's always wanting food, even if he just finished eating. He knows the sound of the cat food bag. Or maybe he doesn't and he just knows that any sound from the kitchen is potential eats.

Before the kitten, my boyfriend didn't care when I said not to free feed my cat (my roommate is allergic so she lives at his place) and would just fill up her bowl whenever it was empty. But now there's this bottomless pit of a kitten who, if there is food in the bowl, will eat it. So my boyfriend has gotten really strict on the only so many cups of food a day. Gizmo is so concerned about eating that if he hears my cat eating he'll run over and push her out of the way and eat her food as if he would starve without it (because my cat is too much of a pussy to smack him even though he's half her size).

Gizmo is also ALWAYS trying to eat whatever we're eating. Pizza? He wants it. Pasta? He wants it? Steak, chicken, chili, soup, Thai, salad? He wants it. He also wants my milk, orange juice, apple juice, milk and beer.

2. They shit. A lot.
Because kittens eat a lot, they shit a lot. And I don't know if you've ever smelled kitten shit but it is one of the worst things ever. It's even worse if you live in a small apartment. When Squeekers was a kitten I lived in a studio apartment and it was the WORST THING EVER when she shat. Oh my god it was awful.

And as kittens they often don't understand the point of burying their shit, which, if they did, would lessen the awfulness of the shit smell. Our litter box is placed in a secluded area of the house that no one really goes to. The litter box has a lid, a filter in the lid to reduce smell, a "litter scent" air freshener stuck to the lid near the opening AND a real air freshener outside the box and when Gizmo shits you can STILL smell it in the entire upstairs of the apartment.

It gets worse because they're so damn curious as kittens, when you're cleaning the litter box they're there watching you. And then they immediately shit it in after you've just cleaned it, perpetuating the kitten shit smell. We keep a lot of candles around now.

Also on this same line of thought is kitten gas. Gizmo once farted on my bf's lap and my bf exclaimed "It's a fucking thick cloud of gas. If that fart had been any thicker it would've been shit."

3. They're super hyper, but rarely when you want them to be.
I don't know what the cats do all day but they're almost always asleep/lazy when we're around. Even if we want to play with them it's sometimes really hard to wake them up from their kitty comas.

But, whenever we want to go to sleep/are busy (making dinner, showering, etc) they suddenly regain all their energy. Sometimes the sounds of them tearing around upstairs makes it sound like there's a fucking bowling alley up there. Even when we do succeed in playing with them (and trying to wear them out) they're still up there running around like a bunch of fucking maniacs around 1am. 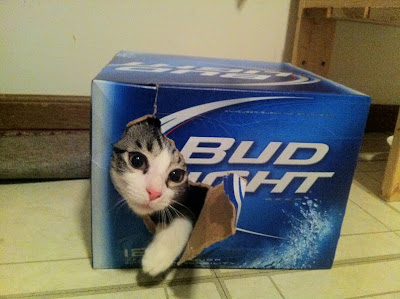 5. Everything is a toy...except toys.
Like the glass, which I'm sure Giz either assumed was a toy or was trying to get the last drops of whatever out of it, everything that shouldn't be a toy is a toy.

Contact cases? Toys. Plastic bags? Toys, ESPECIALLY if they're in the bedroom while people are trying to sleep. Papers for work? Toys. Clothes? Toys that REALLY need claws dug into. Potted plants? Toys, especially if they can be knocked over and have dirt go everywhere.

Bag of catnip with a jingle bell on it? Nah. Not interesting. Balls with jingle bells? Nah. Thing on a string? Sometimes, but then he'll get bored and go chew on a shoe.

So, if you're considering getting a kitten, I'm asking you to consider my points and think of maybe getting a grown cat instead. I'm telling you, kittens are assholes.
Labels: cats , personal

She was finally convinced that she couldn't eat food we had already put into our mouths, but it took forever. Good luck with Gizmo! It's a good thing they're so freaking cute.

Aw, thanks so much. Hopefully he won't be such a handful for too long. Your kitty is soo cute!