Things I Love - My Pocket Knife 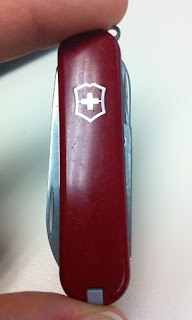 This is my Victorinox Swiss Army Knife

(or as I call it, just my pocket knife).

It's one of the best things I own, and I have it with me almost all the time.  I grew up with my dad ALWAYS having a pocket knife on him and it was such a handy little thing.

When I moved away from home to go to college I found myself in positions where a pocket knife would've come in handy, but for some strange reason I was too lazy to actually go and get one for myself.

A few years ago I was recognized by my old job for having worked there 5 years. As thanks they gave me a little catalog of stuff I could pick from as a gift, I couldn't help but choose this little guy.

It's awesome and I love it. I think it's something everyone should have.

I mean, just look at all the stuff it has! 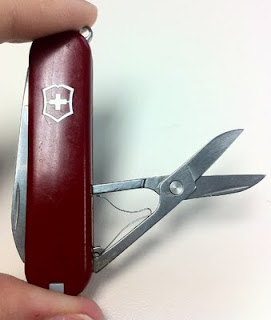 You get scissors!  Broke a nail and now it looks all wonky?  Got a runaway string on your shirt? Tag on your new pair of sunglasses? Something in that plastic packaging that is harder than shit to open? Long nose hairs? No worries!  You have a fucking pocket knife! 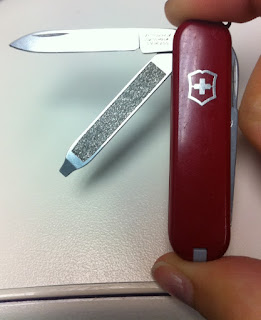 You also get a knife!  I mean what would a pocket knife be without a knife?!  The one on mine was hella sharp at first and I almost seriously hurt myself at one point, these aren't something to just fuck around with.  With the knife you get an increased sense of security!  I hold it in my hand sometimes, knife out, when walking home alone in the dark. Yeah, that'll keep those nasty muggers away!

The knife is also useful for cutting things and opening packaging (and cleaning your nails if you're careful).  It's my go to item when I get a new box in from Amazon!

Below the knife you'll see the file and flat head screwdriver!  Yeah that little weird squared off part is the screwdriver.  I don't really use it that much as most of the screws I have that need screwing are much smaller than that, but I've tried it before on bigger screws and it works pretty well!  You can also use the screwdriver part to clean your nails if you're not risky enough to use the knife.

The file is pretty self-explanatory. I don't have many things to file with a file, except my nails, and since I manage to break my nails so often it comes in handy quite a bit. 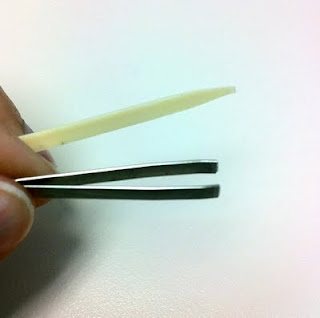 You also get a reusable toothpick and a pair of tweezers!  To be honest, I don't use these two very much.  I'm not much of a toothpick user to begin with.  I don't know if it shows well in that picture but my toothpick is bent at the bottom since I tried to use it to open my Xbox 360 case (gotta stick something through little holes to pop the case open) and it wasn't really strong enough for that and I bent it a bit.

The tweezers are good for splinters probably some other things that I can't think of, but I don't care for them when it comes to plucking my eyebrows.  I carry another pair of tweezers on me at all times for that purpose though.  I guess I'm just picky!

I know mine is just the basic, everyday model, but they have some really fancy ones with can and bottle openers and corkscrews and Philips head screwdrivers and saws and other awesome shit.  You can see all the different awesome ones here.  Some of them even come in fancy colors and designs!

I mean, how could you NOT want one of these?
Labels: awesome , things I love