My On-Again, Off-Again Relationship with World of Warcraft | explodedsoda

My On-Again, Off-Again Relationship with World of Warcraft

World of Warcraft is one thing I can't quit. Some girls have that boyfriend they can't seem to let go of, but for me it's this damn game.

I was first introduced to WoW when the guy I was dating at the time (2004 so..jeez I was 16) was in the beta. We broke up and in a sad attempt to get him back I ended up buying the game a month after it's release so we could all play together.

I ended up getting addicted. (and no the guy and I didn't get back together either, haha)

The first server I played on was one of those that had a TON of issues in the early days of the game, and after a month or two I couldn't take it anymore and quit. It was just such a pain in the ass never being able to play or always getting kicked off the server. WoW was like a lover that was never available except when you weren't.  Luckily, later that year Blizzard had fixed a lot of issues I got back into it again, this time with a different group of friends.

Over the past 7 years (7 years, can you believe it?) I've quit probably 5 times; pretty dysfunctional relationship huh?  I always seem to quit before new expansions come out too. I've only hit the level cap once (level 60, then quit almost immediately before Burning Crusade came out), mainly because every time I start up again everyone is on a different server.  And I'm cheap so I'm not about to transfer a character so I just make a new toon and start the leveling process all over again.  Not only that but once they added in achievements to the game I became a bit of a completionist (going for Explorer and Loremaster right now!) and spend most of my time doing achievement things.

I actually went to Blizzcon during one of my hiatuses from the game, hoping that I would get a beta key to Starcraft II, but instead got one to Wrath of the Lich King. Kind of useless to me AND eBay kept removing my auctions for the beta key so I didn't even make money off of it, nor did I play the beta.  Sadly enough about a month after the beta ended I started up my account again. What a waste.

The last time I quit I thought it was for good, just like every other time. The guy I was dating kept mocking me ('Oh are you flying around on your dragon again? Why don't you do something social? You're such a dorkus maximus.') so I quit. I let someone convince me that WoW and I weren't meant for each other and I needed to cut him off. And for two years I didn't play WoW; two years I didn't play because someone thought I should change. Silly mistake.

The first thing I did when we broke up was start downloading WoW and reactivate my account. (and I am seriously not even joking, I was bawling my eyes out while drinking wine by myself and doing this).  I couldn't help it, I'd been hearing the sounds from my roommate's laptop for months while she would play and I just had to beg WoW to forgive me and take me back one more time.

And WoW gladly took me (and my money) back with loving, open arms. 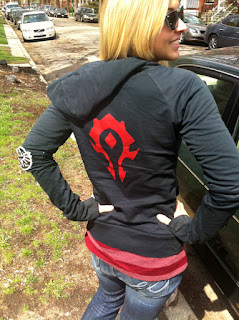 I'm a Horde girl, if you can't tell from the picture, but I play Alliance on occasion (though I don't enjoy it!)
Labels: Blizzard , conventions , gaming , personal