I woke up Saturday morning around 9am.

I woke up at 5am and then every hour until 9am because the fridge in our room was making some ridiculously obnoxious noise that sounded like the mix between being hit with a hammer and a coffee maker percolating.

At 9am I eventually gave up on trying to sleep in and got up.

The next few hours were spent showering and getting all pretty and then waiting on my aunt Angela and mom to do the same. Then we joined Uncle Jim, Aunt Julie and my cousin Joey and went downtown to The West Side Market. I LOVED it there. I was drooling at all the fruit and pastries, especially since I had yet to eat that day.

Eventually we met up with a butt-ton of other family members (I think there were 13 of us in total) and we went to the Great Lakes Brewing Company for lunch.

My mom's whole family loves beer (and none of us like hoppy beers/IPAs). My mom and her siblings once bought my grandpa a brew your own beer kit and I remember him having special occasion beers for every wedding and reunion. He stopped doing it now but I hope if I ever get married that I'll get my own wedding brew.  My mom has always made a point to try a new beer whenever she can, which is what encouraged me to do my beer list.

So my mom and I, of course, decided to get their sampler of all the beers they had on tap and share it. 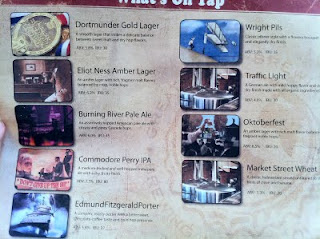 All the beers we got to try. The EdmundFitzgeraldPorter was definitely my fav (I love dark beers), followed by the Market Street Wheat and Wright Pils. 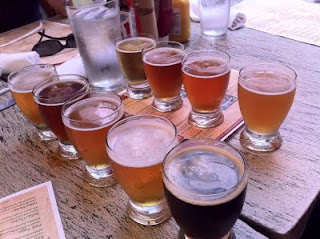 What my mother and I decided to do after drinking them all.

After our nap we went downstairs by the pool where the whole family was getting ready to grill for dinner. The next few hours consisted of my Uncle Tim repeatedly asking me if I needed another beer.  Mostly just had Blue Moon (IN A CAN WHAT?!) and Angela had brought some growlers of Sun King Sunlight Cream Ale, which was pretty damned good.

When it got late enough (so that my cousin in Japan would be awake) we Skyped her on an iPad and passed it around so the whole family could say hi! It made it a little better, but I still missed my favorite cousin being there.

As more people started going to bed, the only other cousin who is 21+ talked my two youngest uncles, into playing beer pong. Eventually more family members got involved and I got chosen to be the designated drinker (I don't really play beer pong, I'm terrible at it) for one of my cousins who is still in high school. Family bonding memories that will last a lifetime...unless you drink too much. 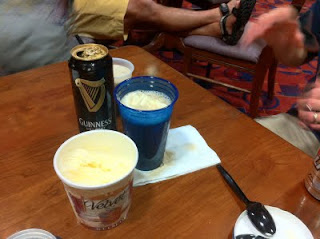 Pretty sure I had a mouthgasm from the ice cream part of the float.

One aunt and I also went on a beer run for the group (she was my designated driver!) and we got hit on while standing in line. I'm a pretty socially awkward person so I really don't care for getting hit on, but my aunt was thrilled since she's married with two kids. Hahah.

After that we stayed up a while longer and talked and drank before we all headed to bed.
Labels: personal