A few months ago I swore off tweeting about how much I hate AT&T. Why? Because I felt like it was becoming a far too often occurrence.

Except now it's become all bottled up inside of me. Especially now, with summer here, the service is even worse with tourists, festivals and fucking Cubs games.

So I'm just going to let it all out:

I fucking hate you, AT&T.

I hate you so much that I'm counting down the days till my contract is up. (310 left by the way).

I hate that when I'm downtown my phone works better (and by better I mean AT ALL) when I turn 3G off. That's right, I run on the fucking EDGE network because if I don't then nothing loads! Apparently every fucking person in the loop is also on your shitty 3G network!

I hate that if there's a Cubs game that my phone is rendered completely useless at my apartment, even though we live 1.5 miles west of Wrigley Field.

I hate that my roommate has an iPhone on Verizon and it loads a bajillion times faster than mine. I also hate that she gets signal almost everywhere! Oh group texts are coming to her but not to the other two of us on AT&T? Well shit.

I hate that you say I can't do data and voice at the same time on Verizon and that's your only selling point for me to stay with you. Except, I can only do data and voice if I'm on your fucking 3G network which, as already discussed, hardly ever works! I've also noticed that, sometimes, once I start a call that my 3G will magically disappear. 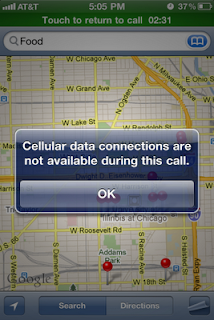 AT&T: Voice and data at the same time! HAHAH, just kidding. It doesn't work either.
I hate that I know where the deadzones are on the L. I hate that there are deadzones at all.

I hate that if I have 3 bars and a 3G signal it really means I have no signal, because my phone basically says "Oh you want that to load? Fuck you."  2 bars? Works. 4 bars? Works. 3 bars? Fuck you.

I hate that I'm trying to send an email from my phone RIGHT FUCKING NOW and it won't send!

I cannot wait until I am done with your joke of a service.