So I figured I could split up my Comic Con experience into two posts since it was just THAT awesome and since we decided to go two days instead of just the one.

We (and by we I mean me) woke up around 8:30am and started getting ready. My hair was being a total bitch and not doing anything that I wanted it to do and I'm pretty sure I burned part of my head with the blow dryer at one point. Eventually I was happy with it and by that point my roommates were up and almost ready to go.

The drive to the convention center in Rosemont was pretty traffic free up until we got to the exact exit for Comic Con. I'm pretty sure we sat in traffic less than a mile away from the con for about 20+ minutes spent another 15+ minutes driving around the damn parking garage. I was honestly scared that we weren't going to find a spot. Whatever though, we spent the whole drive in the garage playing "Midnight Train to Georgia" on repeat.

I also want to note that fast food salads are not good car food, especially when said car has no AC and you're driving down a freeway at 70MPH with the windows down. Lettuce everywhere.

We got our one day wristbands and Cathy and I immediately got in the line to meet Felicia Day and Jeff Lewis from The Guild! Best moment ever was when Felicia Day called out my friend, Victor, who had already met her earlier and said "I thought you said you were scared to talk to girls and here you are with the two prettiest girls here!"

Okay, that was my one designated fangirl moment for this post. 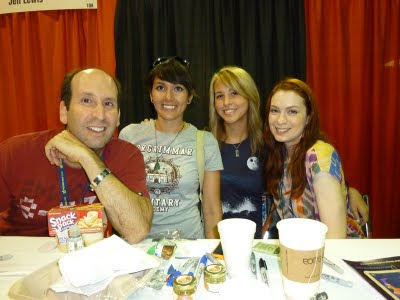 One of the best moments in my life, she's one of my heros!

From there we went to meet up with KL who was with some other friends in the Patrick Stewart and Daniel Stewart Q&A line. We were an hour early for his panel (and it started late) but we got awesome seats! Patrick Stewart is absolutely hilarious. 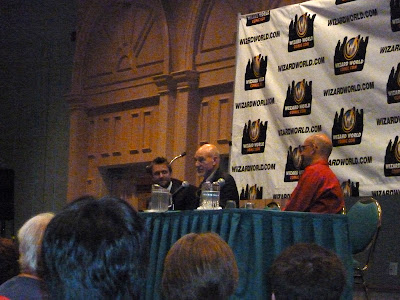 Patrick Stewart might be 71, but I'd still hit it.

After that we had to leave the room and get in the line for the Felicia Day and Jeff Lewis Q&A panel which was in the same room..yeah. Kind of silly, wish they let you stay in the room instead of forcing you out and making you get at the end of the line that's been queuing for the past hour. It was an awesome panel though, they're both super funny and I don't think I stopped smiling the whole time. Also, I totally support Jeff's spinoff idea, It's All Coming Up Vork. 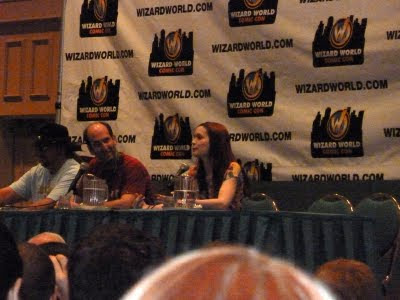 We decided to skip the Christopher Lloyd panel, which was also in the same room, since the line had been wrapped around once already before the Felicia Day panel even began. Instead we left to go wander around the vendor area intent on finding Cathy and I some hot Stormtrooper ass.

While walking around I ended up seeing a very attractive guy cosplaying as the Tenth Doctor and blurted out "I'm going to rape him" while pointing in his general direction. Cathy then forced KL and I to take a picture with him and his friend (who was cosplaying the Eleventh Doctor!) during which I awkwardly hit on him and then got his number! 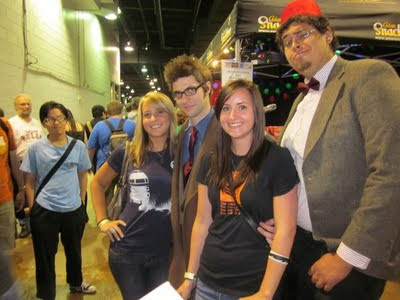 We spend the next few hours wandering around. KL and Cathy bought some art in Artist Alley and we got some pizza and sodas before heading to the adult costume contest, which took forever. They had to move the costume contest to another room because it went over its time limit so we decided to go by the Masquerade Ball, which was supposed to have started half an hour previously.

Except we got there and apparently the DJ was late.  And then it ended up that the DJ completely bailed on the con. Luckily, a staff member had a well stocked iPad and let us know that the hotel was helping him get a setup so that he could at least get us some music. I requested Party Rock Anthem and he said he would play it first.

We went and got some drinks from the bar (which the bartenders were not carding and I'm sure many an underage con guest got some booze that night) and then proceeded to watch people do the Hokey Pokey and play Duck Duck Goose and Red Rover on the dance floor while waiting for music. 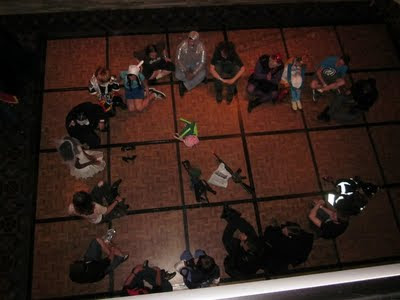 Well, at least they were able to entertain themselves for an hour and a half.

Eventually, music started (and Party Rock Anthem played first which made me so happy), and my sexy Tenth Doctor showed up and we all started to party the night away. Cathy and I met some guys with Master Chief helmets and got to wear those, then FINALLY found a Stormtrooper! We took a bunch of pics with him and danced with him and wore his helmet too. Then Cathy and I danced together while each wearing helmets, and there were people taking pictures of us and asking for pictures with us!

Honestly this part is better just described with pictures. 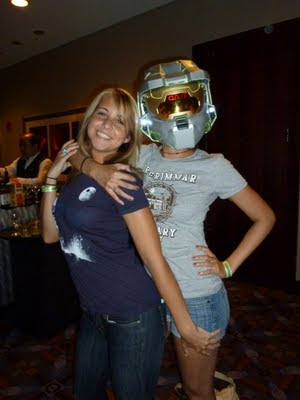 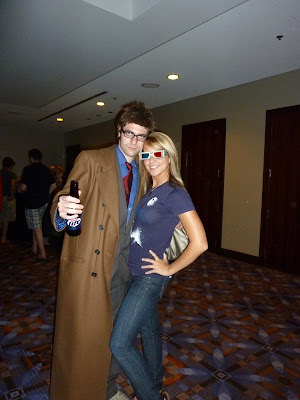 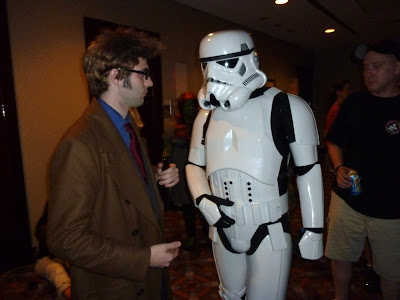 Two of my fantasies next to each other! So hot. 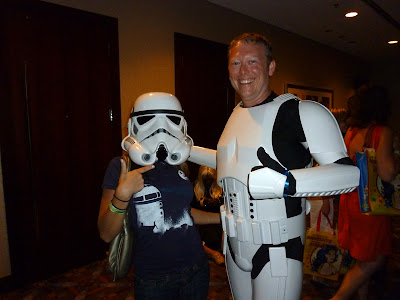 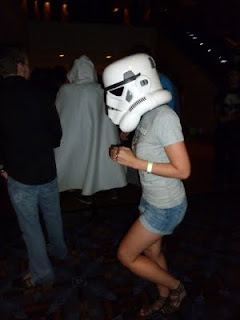 My favorite picture of the whole weekend. Cathy doing the running man. 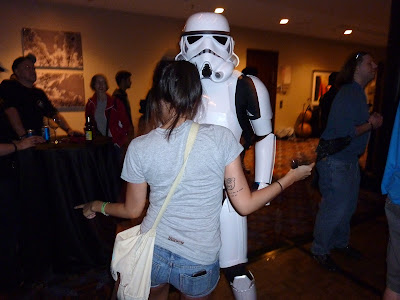 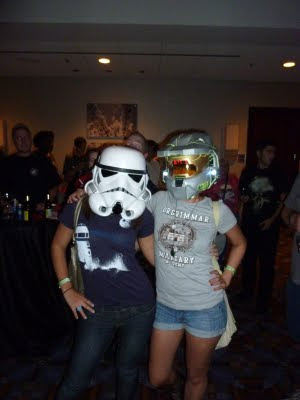 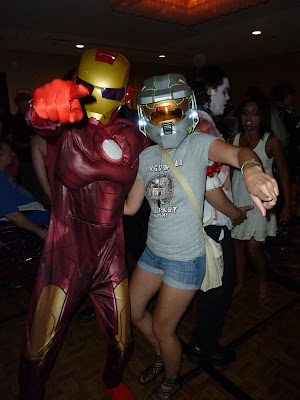 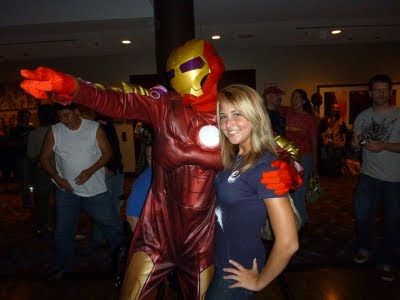 It was somewhere around this time that Cathy and I determined we HAD to go back again the next day.

Cathy only had a beer or two since she had to drive us home, but I got a little tipsy.

Maybe even a little drunk.

Okay, I was definitely drunk.

I remember much dancing and being with the sexy Doctor and Weird Al's White and Nerdy playing and me being super happy about it. But after a while we had to leave. On our way home we went by Jewel and KL, Cathy and I all got a bottle of wine each and then proceeded to stay up all night getting drunk(er), watching the new episodes of The Guild over and over, and playing on the Internet!

Wizard World has videos of most of the panels/Q&As up on their YouTube for those of you who couldn't be there! Be sure to watch the Patrick Stewart one! It's priceless!

I like the first picture because it looks like Cathy is happy to be there, but paying not a bit of attention to the picture being taken. And Felicia Day was totally correct in her assessment of you two.