I woke up at 7:30am on Sunday, even though my alarm was set for 9:30, with a massive headache thanks to all the wine the night before. I got myself some water and my bag of mini donuts and spent the next two hours in bed with my laptop while stuffing my face.

Eventually Cathy got up, just as hangovery as me, and we grudgingly got ready and then left to head back to Comic Con. We left KL behind since she had plans already for the day.  Lucky for us traffic wasn't nearly as bad and we found a parking spot almost no problem! (Note: we played "Midnight Train to Georgia" throughout the parking garage experience again).

We went to the Evil Dead reunion panel, which was absolutely hilarious, and then decided to skip The Boondock Saints panel in order to go get some energy drinks before we both died. Since there's a McDonald's next to the gas station I also got some burgers and ate these on the walk back to the convention center. So delicious.

I met up with my sexy Tenth Doctor again and we hung out for a bit.  Then we wandered around for a bit before coming upon the Sugar Gamers booth, where Cathy immediately started playing Bulletstorm and got hooked for well over an hour. I managed to buy a can of Cherry Bawls off some kid for a couple bucks, which made my day because I'd been craving it all morning.

Oh, Cathy wore her C-3PO backpack and had people asking for pictures with her/it all day. It was awesome.

We spent most of that day just wandering around the vendor area, and spent probably a good hour and a half talking to the super cute guys of Five Year Mission, a band that writes songs for every episode of Star Trek Original Series. 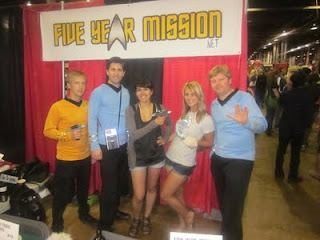 Cute! This is much better than the picture on their camera, in which I look as hungover as I felt thanks to blinking mid picture.

After a while we started to feel extremely exhausted and headachey, and there was only about 30 minutes of the con left anyway, so we headed home.

The rest of the day was spent lounging, gaming and napping on the couches.
Labels: conventions , nerdy , Star Trek

Don't worry. The second picture we took is much better. :)