A couple weekends ago my roommate, Cathy, and I went to the Creation Entertainment Star Trek Convention in Chicago. This was Leonard Nimoy's last convention appearance and it was sold out.

Luckily, we had bought tickets early, before the news of it being his last broke. We bought them basically right after we got home from Wizard World Chicago Comic Con since we were on a convention high.

We skipped the part of the convention on Friday night so that we could have a relaxing evening with some booze. Cathy also had a thing for school the next morning so we didn't want to go out.

We both ended up slightly hungover anyway though.

Our goal was to get to the convention around 12 or 1 on Saturday since there didn't seem like many panels or things to do before then. And we were hungover. After Cathy got back from her school thing we got some breakfast (and a little hair of the dog) some coffees to go and were on our way!

Before we left we saw online that the picture tickets with Nimoy had sold out, and we were absolutely devastated. But, when we got there, they had extras! Best. News. Ever. We (mostly Cathy since she is a huge Original Series and Spock fan) would have cried if we had lost our last chance to get a picture with Leonard Nimoy.

The line was downstairs in the hotel and wasn't all that long. We waited and waited and soon it was almost our turn! We were thinking of what to say to them the whole way and then when we finally got up to them...we couldn't think of words. I've had a crush on these two men (mostly Brent Spiner though) since I was a kid, since I was at least 8 years old and saw Star Trek: First Contact with my dad in the theater. All I could muster was a really weak "hi" and a "bye" and I think maybe a "yeah" in there. How embarrassing. We realized after we walked out of the photo room how pathetic we had been.

And then we fangirled a little and squee'd.

Afterwards we wandered around the vendor area for a bit and then grabbed a seat in the main panel room to wait for the Frakes and Spiner panel. The panel was absolutely hilarious. They both sang a bit, answered some fan questions and Brent did his infamous Patrick Stewart impression. These two are two incredibly amazing, talented and entertaining men, especially when together. After that was over it was time to get our photo! 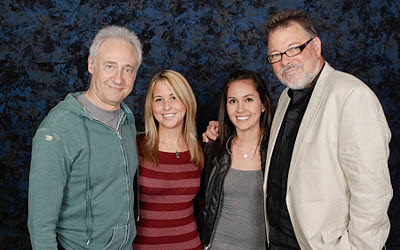 We were both so happy with the picture. Since it was taken by a professional photographer we had been slightly worried about how it would come out since you don't get to see it until it's printed. It's perfect.

There wasn't much else to do except buy cool things and, since everyone had just gotten their photo prints, the autograph lines for Brent and Jonathan were incredibly long. We checked the schedule and decided we would get our print signed the next day and went to get some brews and pizza at the Giordano's down the street.

And then we fangirl squee'd all the way home, while also rocking out to some Boston.