Needless to say, we were pretty hungover for the first day of Blizzcon and even though opening ceremonies weren't till 11am, we had to be up and at IHOP to meet a friend and some of his friends for breakfast at 8am. Food was pretty disgusting. Except bacon. Mm..hangover bacon.

We got to Blizzcon with some time to spare before the opening ceremonies. Our friend procured some seats for all of us and Cathy and I went to wander the floor and see what was going on. Eventually got some tweets from another twitter friend who had pretty decent seats for opening ceremonies, so we went and joined him and his buddies. 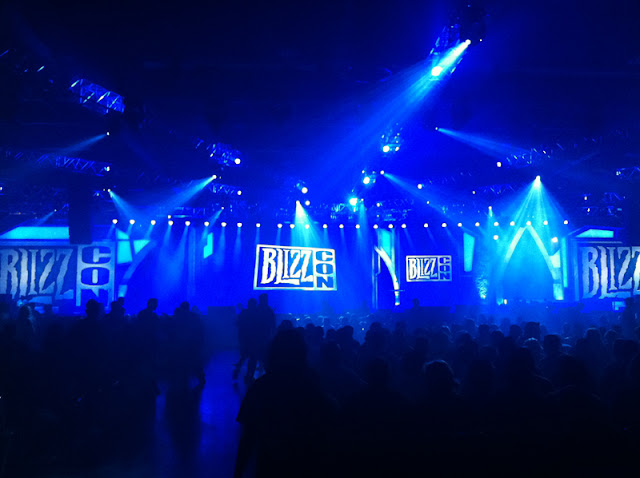 Opening ceremonies were great. Loved Michael Morhaime's talk about the past 20 years of Blizzard. They announced the World of Warcraft Annual Pass with the Azrael's mount for WoW, instant access to the new WoW expansion beta and Diablo III included. (I, of course, bought this nearly immediately once we got home.) Got to see a new Diablo III cinematic, new info on StarCraft II Heart of the Swarm, some info on Blizzard: DOTA and the unveiling of World of Warcraft: Mists of Pandaria by the incredibly hot and nerdy Chris Metzen. 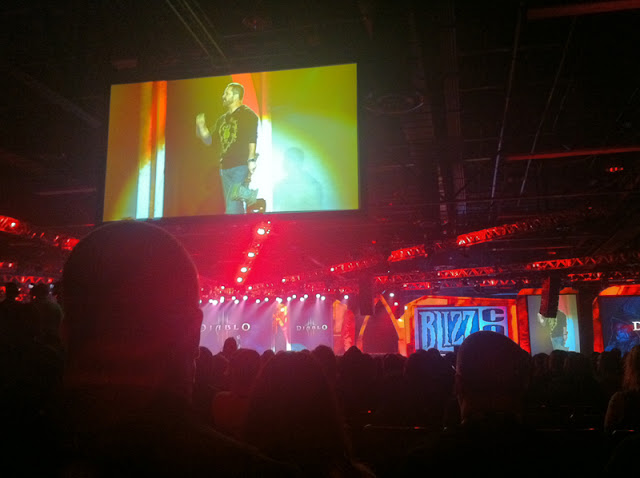 I'll admit, at first I wasn't sure if they were even being serious about WoW: MoP, and then once I realized they weren't kidding I was really skeptical about the whole thing. But Cathy and I ended up playing the demo at least three times (and didn't find that damn Pandaren poster any of those times!) and I'm really excited for the expansion. Can't say I was too keen on the Monk class, but then again I've always gone for ranged classes. Give me a hunter or mage any day.

After the opening ceremonies we wandered around for a bit, watched some StarCraft 2 competitions, got some food, played some Mists of Pandaria, played Diablo 3 beta (and the game servers crashed while we were playing and we got to sit and wait for 30 minutes for them to fix it while I attempted to flirt with one of the staff), bought Horde sweatshirts from the Jinx booth (I love mine so much I want to buy another one in case something happens to this one) and of course took a bunch of pictures. 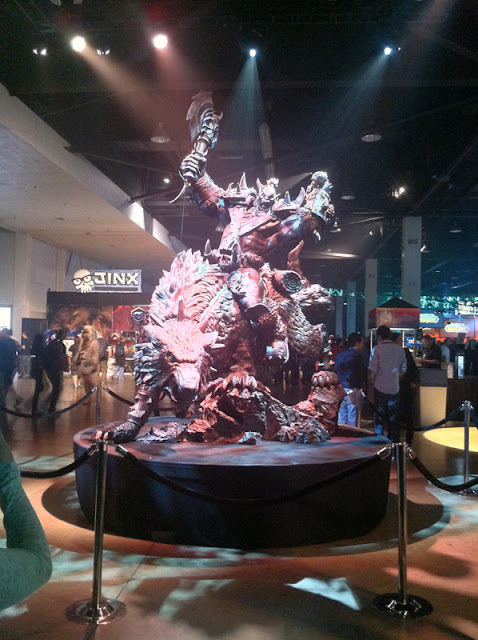 For the Horde, baby! 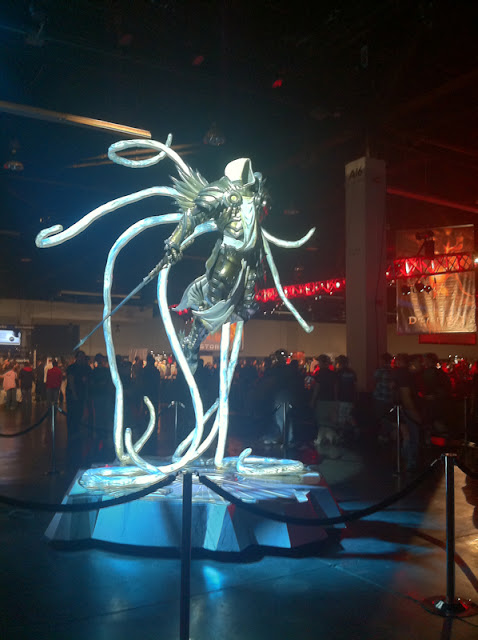 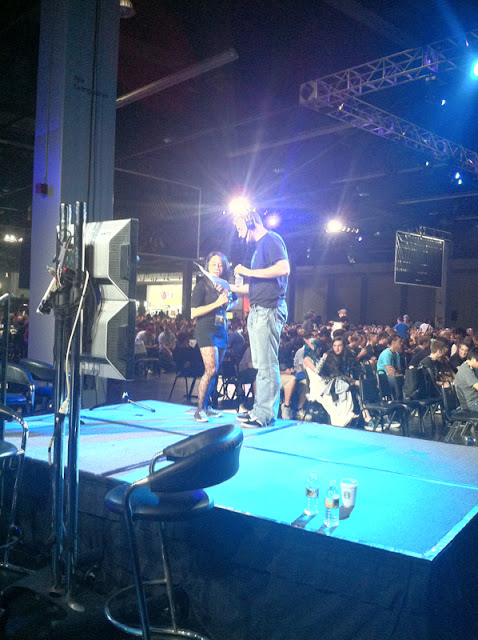 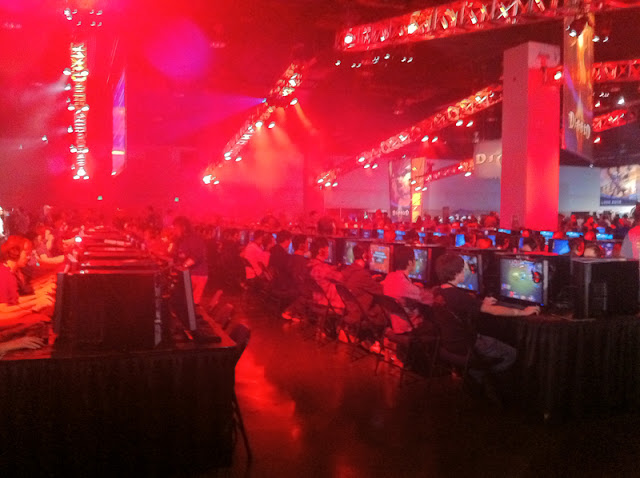 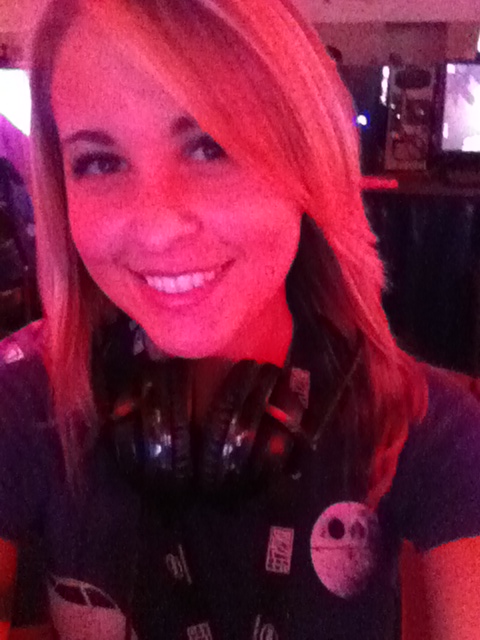 Waiting for Diablo III to be fixed. 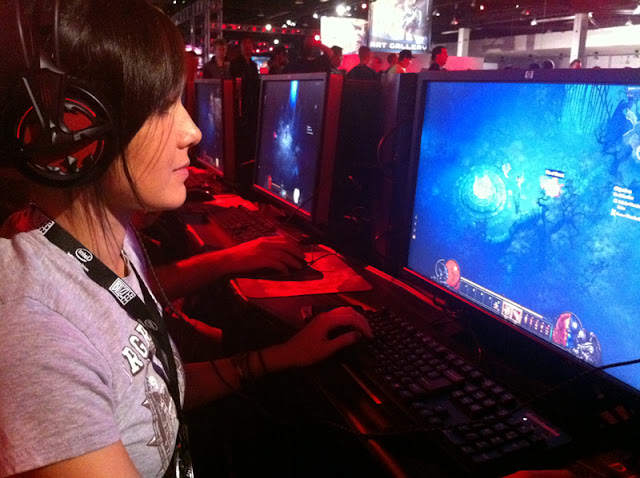 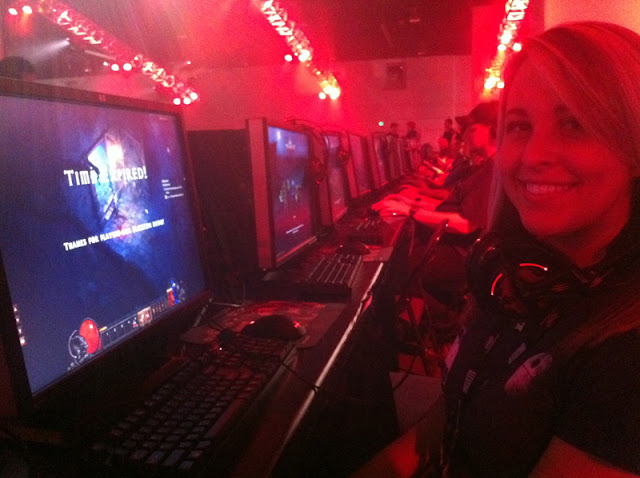 We went and got seats for the Costume and Dance Contests with some of the guys we had met the night before (Wil Wheaton lookalike and Pocahontas). The Contests were great, I wish we had gotten better seats with a better view of a monitor so I could've gotten more pictures. Dance Contest was absolutely hilarious.

After the contests we went back to our room and I texted Stan to find out "where da party at" that night. He said he'd get us on the list for the Curse party and maybe we could go to the GSL finals barcraft being hosted by TwitchTV too, since they were next door to each other. The Curse party was pretty cool, other than the lack of drink options (but free booze, can't complain!) and the DJ who didn't have any Weird Al (uh, do you know where you're playing? White and Nerdy is needed!). They did have a beta of some FPS and a few PCs set up to try it out, a really lame basketball arcade game that I kept managing to knock balls out of and nearly spilling peoples' drinks, Monopoly Pinball (which we had at the arcade I worked at and I LOVED) and two SkeeBall machines. I decided to see if I still have my leet skeeball skillz and I kind of do, even when slightly intoxicated with a drink in my hand. GETTIN DEM 100s. It was fun. I think there are pics and a video somewhere of this taking place. I need them in my possession!

We went VIP for a bit at the Curse party, I ran into John who works with a friend from college, Jon, at Steelseries who was at Blizzcon for work. (Other Jon had the chance to go but decided not to like A JERK). 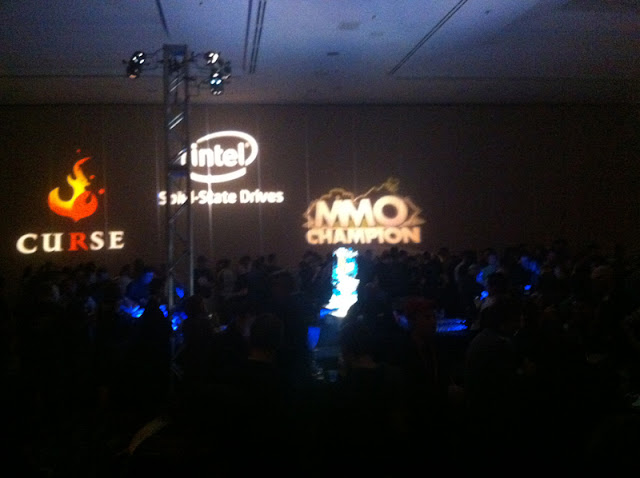 It was very dark. They had an awesome ice sculpture of a SSD too.

We went next door to the GSL final barcraft event, managed to get into VIP (which was really small and had a bad view of the match but we were drunk who cares). At the chime of midnight it was officially Stan's birthday and we did shots of vodka out of wine glasses to celebrate. I think we also took shots of tequila out of the wine glasses with no salt and no lime. Mmm. Delicious drunkenness. 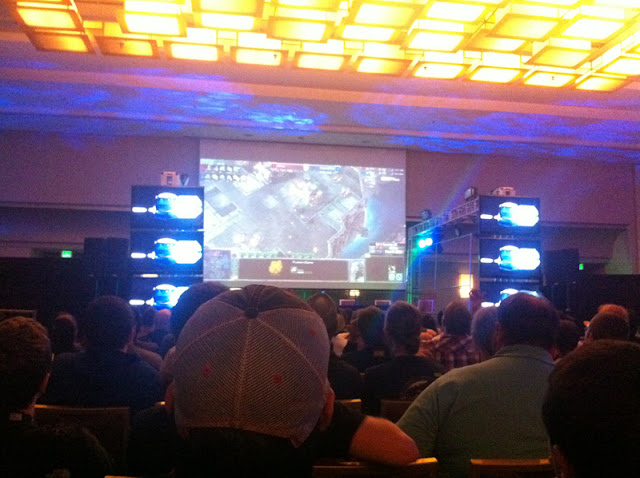 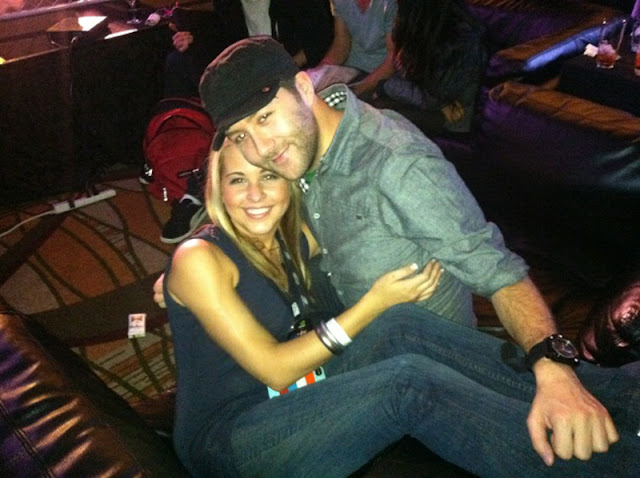 Me and the birthday boy.

After barcraft shut down the group we were with all decided to go on a drunken trip to Denny's. Denny's was much further than I thought, and I highly regretted wearing heels, but the bacon was worth it. Cathy and I had to be up by 9am to meet up with our friend from the previous morning for a tour of Blizzard offices. I don't think I got to sleep until near 5am or later.