What better way to deal with Post-Con Depression (PCD) than to relive your entire convention experience by writing it all down in some blog posts?

Cathy and I left for California after work on Wednesday the 19th and landed at LAX around 11pmish. By the time we got to our hotel it was well after midnight (and was past 2am in Chicago) so our California adventure really started on Thursday...unless you count the ridiculousness of us being in O'hare for nearly 4 hours. There was much laughing. And singing narration. And salt and pepper. Long story. Don't worry about it.

We thought having a hotel in downtown Los Angeles would be cool, but apparently downtown LA is actually kind of boring. We made a late night 7-Eleven run and got some snacks. I got potato salad and forgot to get a fork and ended up eating it with my hands. Classy. I know. Also, Limon Lay's Chips? They taste like the green Trix. Also: Delicious. That bag of chips lasted me the whole weekend and shared a bed with me. Also someone left their Spanx in our hotel room closet. And apparently the people the room next to us started banging audibly, but by that point I was already asleep.

Thursday morning Cathy was up super early in order to finish her stats homework since she needed to submit it before that evening. I slept in a bit, we checked out and left our bags with the hotel and got lunch with one of Cathy's friends from high school who works in the area. Then we decided downtown LA sucked and got a ride to our hotel in Anaheim and figured we should go and pickup our Blizzcon badges.

Holy fucking shit that line for the badge pickup was long. Once we got to the end of the line we were like "Well fuck this" and proclaimed that we would go and get beers instead. Two awesome guys from Geekadelphia overheard us and asked if we'd like join them for beers, so we did (and it was happy hour, 3 beers for $6?! The only alcoholic drinks I paid for all weekend).

Three beers later we went back and the line was much shorter, got our badges, got our swag bags, ran into my friend Ryan from twitter (was very nice to finally meet him! look forward to seeing him at Blizzcon next year), and then retired back to our hotel room to figure out if there were any parties or where all the Blizzcon people would be hanging out that night.

Cathy did some twitter searching and managed to find out about the WoWHead/WoWInsider pre-party through a guy, Stan (who works for Astro Gaming) who said he would get us in past the line, so we headed on down there.

But he did hear me and did turn around AND it was the guy we were there to meet. Embarrassing much?

We went and sat at his table, met his friend Nick, who was taking photos of Blizzcon for Destructoid, and a few people who worked with Team Dignitas, and an awesome woman, Amber, from PMS Clan and TwitchTV. We got drunk with them and eventually left that party to head to the Hilton bar for more drinking! 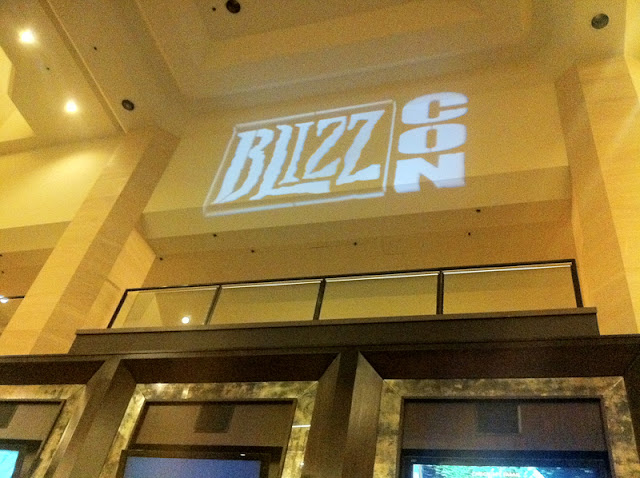 We mostly hung around Stan and his friends but they knew a shit ton of people since they're industry and go to a crapton of conventions and it's like a little community. So while they were mingling we did some mingling of our own.

Met a friend of a friend, met some guys we had judged earlier assuming they were just douchey bros (which was justified because they first assumed we were just dumb girls who didn't game) but who ended up being really cool, Cathy met some pro Starcraft players, I got a piggy back ride, we met a guy that looked like Wil Wheaton (and his friend who I decided would be named Pocahontas for his beautiful hair which Cathy and I drunkenly put in pigtails) and drinks kept magically appearing in my hand all night.

We got back to our room and passed out probably somewhere around 3am.