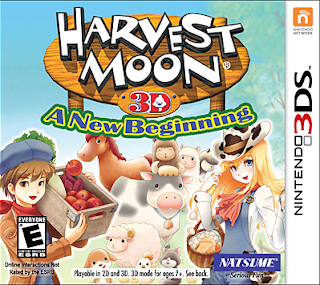 My favorite part of the Harvest Moon series has always been the picking, wooing and eventual marrying of my in-game spouse, and Harvest Moon: A New Beginning has been no different.

The game only starts out with one bachelor, Neil, and the others won't be available until you build the correct building that the character will eventually reside in. Some of these buildings won't unlock until you've completed other tasks. Basically, getting the right guy might take a while.

Neil was cute, but I didn't like his personality.  But, I started wooing him anyway since he was the only guy available at the time. He was standoffish and mean, always telling me to leave him alone and such, so I was over joyed when the hairstylist, Allen, finally moved in. I ended up reviewing the rest of the bachleors on Fogu.com, and decided that Rod looked too young and Soseki came off as a little strange (and Amir and Sanjay would take far too long to get into the village).

Thus I began my pursuit of Allen.

A New Beginning is the first game in the series to introduce the concept of dating into the games. Whereas previous games had you go straight from wooing to marriage, this game requires you two officially "go steady" before you can give that special someone a blue feather. This is easily done by purchasing a commitment ring and having the bachelor's heart color blue or above. Or, if you'd like a challenge, you can get a reverse proposal (which, oddly enough, still requires YOU to buy the ring) by giving the bachelor at least a hundred gifts, and you can only give one gift a day.

So I found Allen sweet, his teasing sweet, so I decided to put in the effort and go for the reverse dating and reverse marriage proposals.

And that's where things went sour.

The reverse dating proposal went off without a hitch, but now my sweetie is being a huge dick. He's saying things like "Listen, what's yours is mine. And what's mine is mine. What... that's unfair? Sooner or later, that's the only way you'll want it to be." or when I see him in the forest something along the lines of "Oh that's cute you want to be near me, I guess I'll let you stay by my side for a little."

Suddenly, I don't like him all that much anymore, and find myself wishing I had gone for a different bachelor.

And here is where my dilemma comes in. I can either push forward and give him the last 50 gifts (will take about 50 in-game days to do) to get the reverse marriage proposal...or break up. And breaking up, as in real life, is hard. First I have to drop his heart color from red back down to purple or black, which requires me to give him gifts he hates once a day and do other things to make him hate me like trying to propose to other bachelors. THEN I have to not talk to him AT ALL for 31 in game days (who waits that long to break up with someone not talking to them?!), at which point I can finally trigger the breakup scene.

And then I'll have to work on redoing all the wooing over again with a new guy.

So this is where I'm stuck. Do I go for that reverse marriage proposal with Allen? Do I go for the breakup and find a new guy? Do I then try and go for the reverse proposals with the new guy?
Labels: gaming