How to make your own EL wire World of Warcraft Horde hoodie, just in time for Blizzcon! | explodedsoda

How to make your own EL wire World of Warcraft Horde hoodie, just in time for Blizzcon! 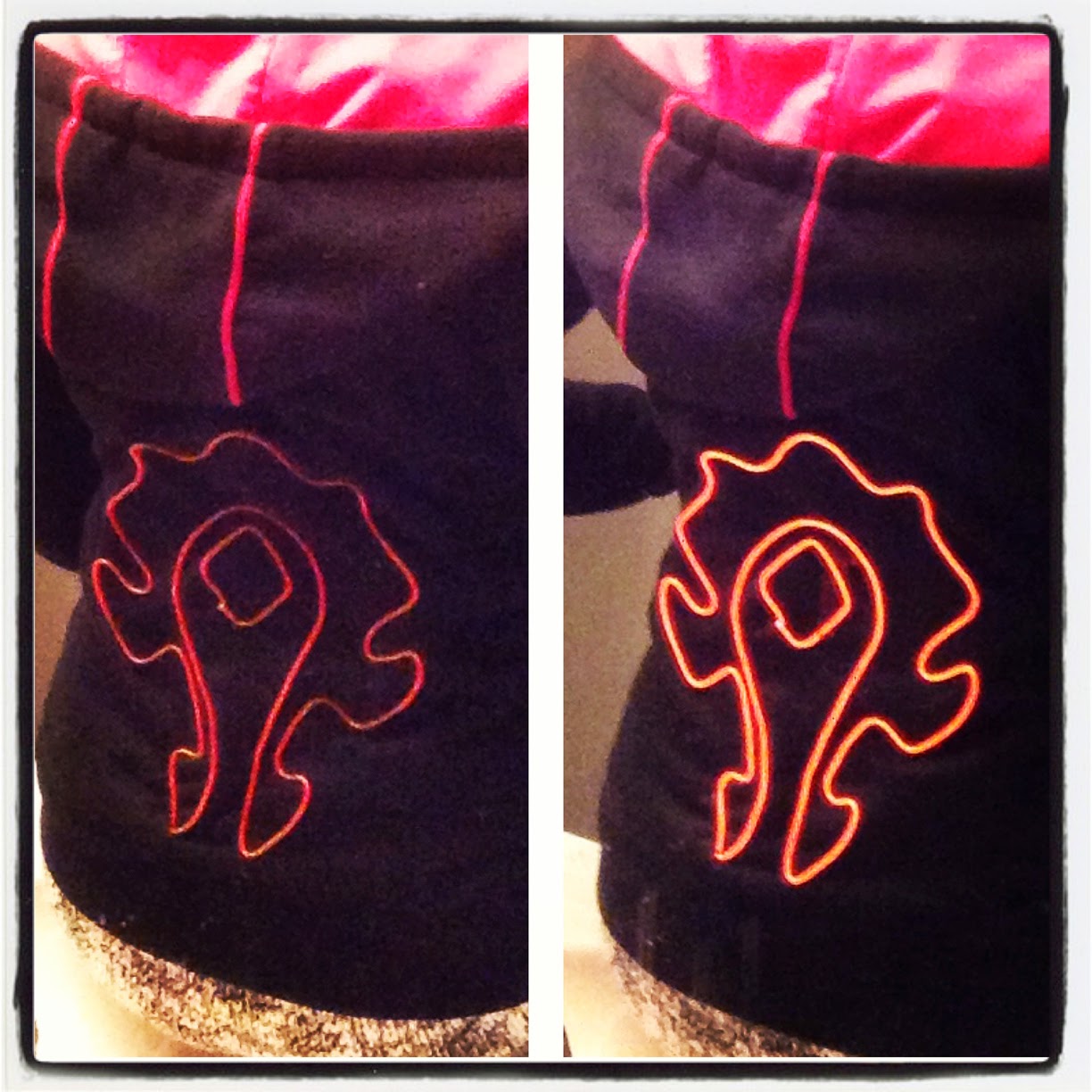 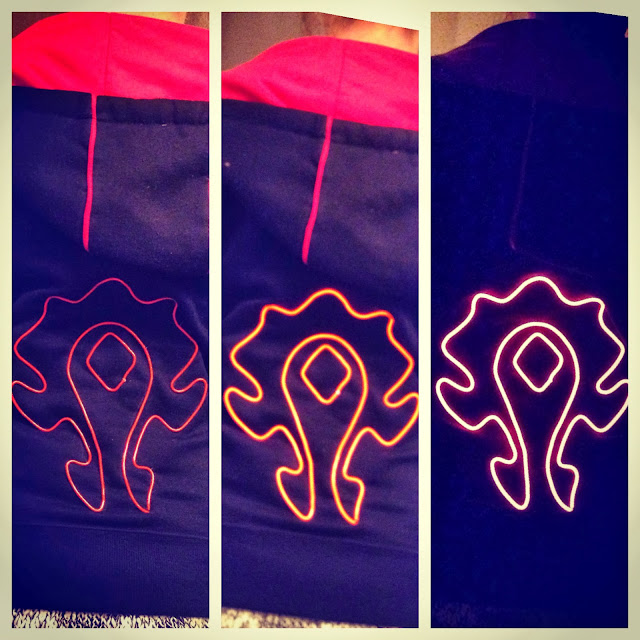 Items Needed:
- EL wire with inverter (I recommend the linked Adafruit starter pack if you're new to EL wire!)
- Two AA batteries
- Dressmaking pencil, chalk or something to temporarily mark your hoodie
- Clear thread
- Sewing needle
- Scissors
- A hoodie you don't mind poking some holes in / making badass
- Stencil + exacto knife or ability to draw what you want to light up (I used this Horde symbol)
- Patience 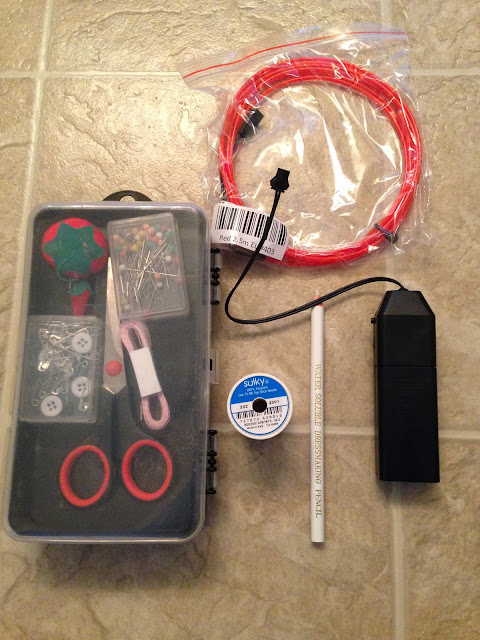 If you often wear your hood down I recommend getting someone to help you mark with the pencil where the hood falls on your back, this way you know how far down to put your design and not obstruct it if your hood is down.

If you're using a stencil for your design like I did, print it out and then use an exacto knife to cut it out. Then place it where you'd like your light up design on your sweatshirt and trace around it. I tried to pin mine down while I did this. 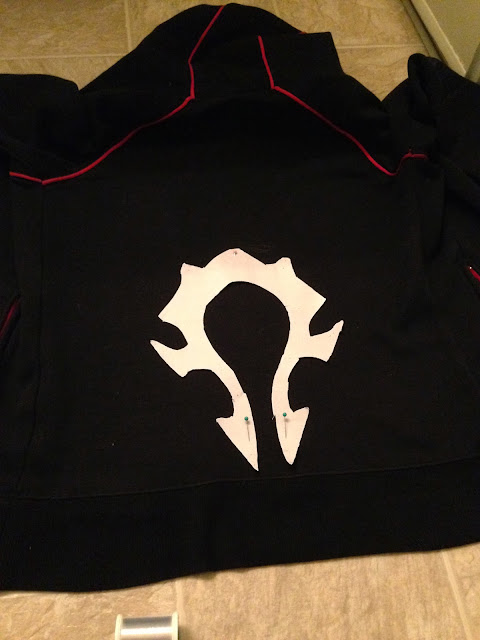 At this point you're going to have to start poking holes in your hoodie. First we need to choose a pocket to hold the inverter and then poke a hole on the inside of this pocket. My hoodie has a built in internal pocket so I put my inverter in there and poked a hole in the bottom corner of the pocket as shown below. 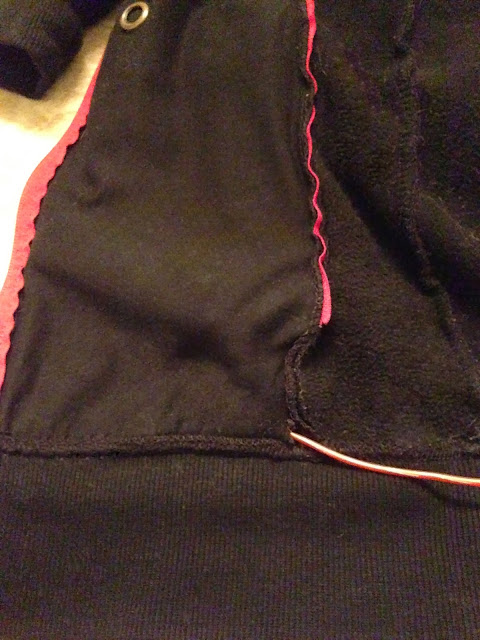 Flip your hoodie back over to where your beautifully drawn design is and choose a spot that you want the wire to start at and make a hole big enough to fit your wire through!

Now the fun part! Start sewing that wire down! 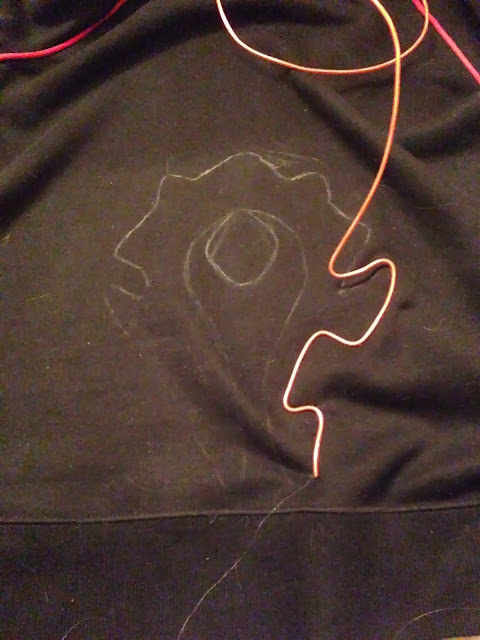 I swear that's all clear thread and not hair all over my sweatshirt.

Now, I don't do much sewing, so maybe there was an easier/faster way to do this than I did, but it took me probably a few hours to sew all this down. 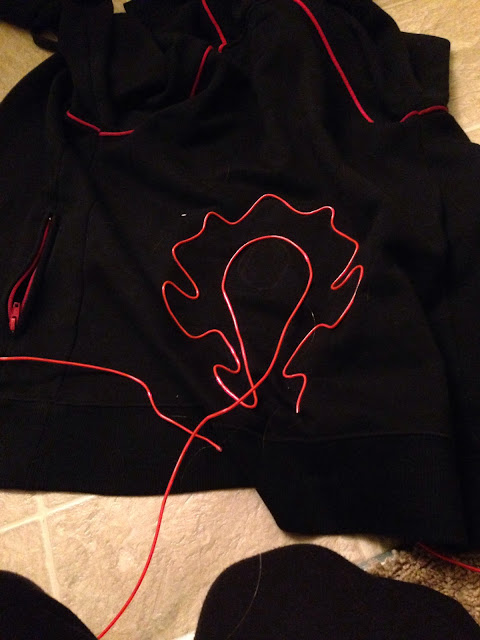 Originally I thought I was going to do the Horde symbol as all one piece, but later decided since I already poked two holes in my hoodie then what was one more. For the entire outer symbol the EL wire enters and exits through the same hole, then I ran it through the inside of the sweatshirt to where I put a hole for the inner diamond section. 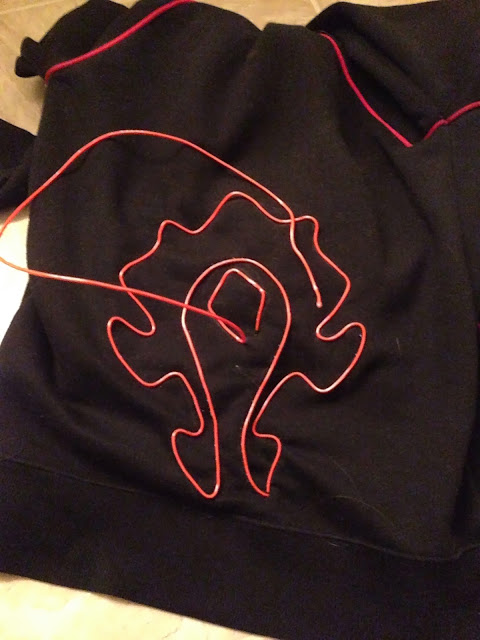 This time instead of running the wire back through the hole, I just cut off the excess and sealed the end with hot glue (you could also use epoxy or electrical tape). I then also went through and sealed both holes on the back with hot glue to prevent too much movement/stretching.

Now, put some AA batteries in your inverter, plug your EL wire in and click the button! Now you're all ready to light up your next gaming convention!

Unfortunately my iPhone's camera doesn't capture how red it actually looks when it's glowing.